A brief look at Kenya 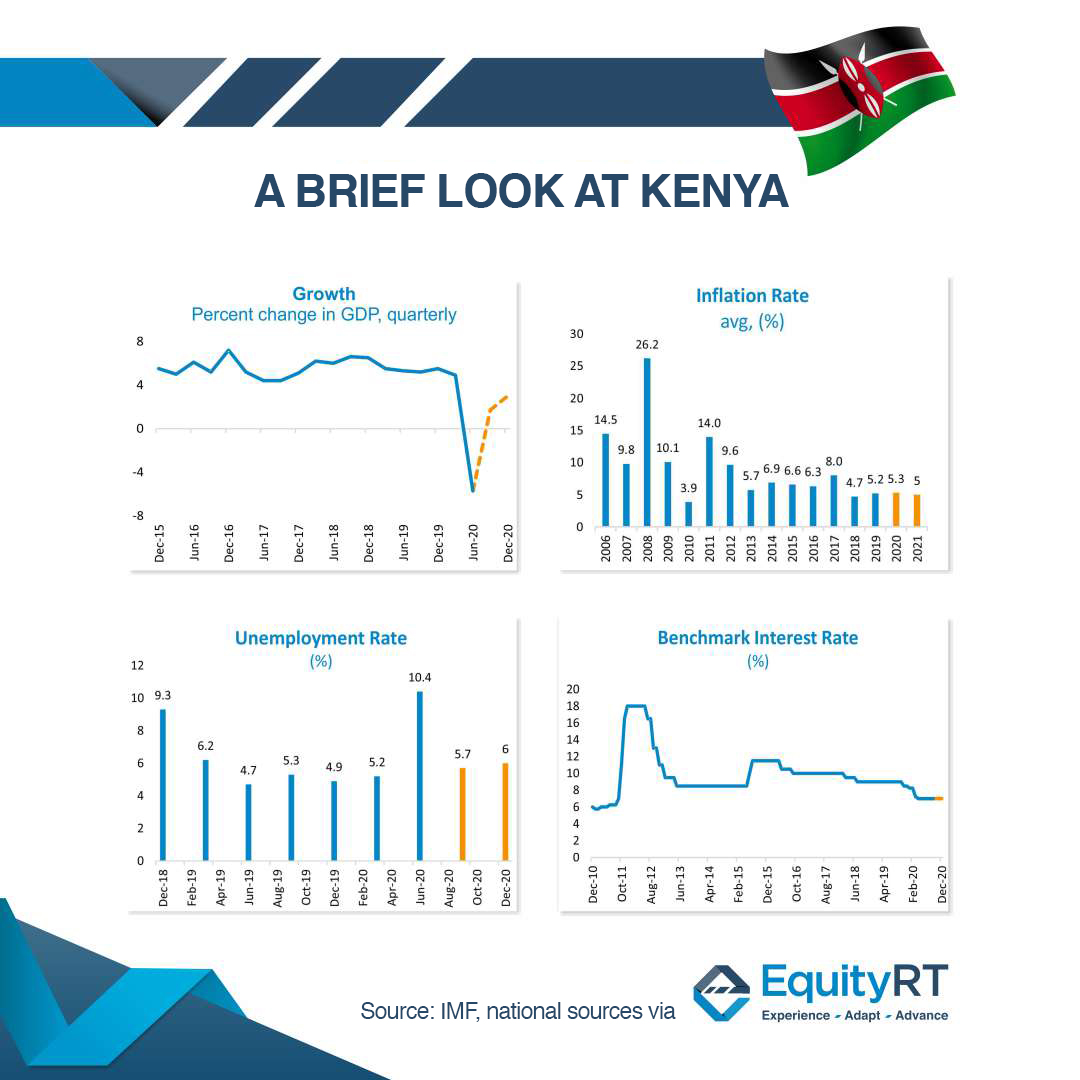 Kenya has had a sustained GDP growth over the past decade with an average growth rate of 4.6 percent in annual basis. In 2019, the economic growth was 5.4 percent, making the country to be one of the fastest expanding economies of Sub-Saharan Africa.

As many other countries around the globe, the Kenya’s economy has also been hit hard by the Covid-19 pandemic.  In the second quarter of 2020, the economy shrank 5.7 percent year on year for the first time at least since the first quarter of 2004. This poor performance was mainly the result of substantial contractions in services, education, transportation & storage and taxes on products.

The hotels and restaurants – have been the worst-performing industries due to the pandemic-, contracted by 83.3 percent in the second quarter, followed by contractions in education (-56.2 percent), administrative services (-15.7 percent), transport & storage (-11.6 percent) and wholesale & retail trade (-6.9 percent).

Annual growth rate in Kenya is expected to be 1.7 percent by the end of Q3, further accelerating to 3 percent in Q4 2020. Amid moderate economic performance this year, the growth is projected to rebound in 2021 and 2022. In the October 2020 edition of the World Economic Outlook, the IMF projected a growth of 4.7 percent in 2021 and 6 percent in 2022.

The annual inflation had remained high in the past decade touching double-digits and peaking at 26.2 percent in 2008. In 2019, the average inflation rate amounted to 5.2 percent.

The inflation stays within the National Treasury’s inflation target band of 2.5-7.5 percent.

Looking ahead, the IMF projects that the average inflation rate will level off at around 5 percent in the near future.

In Q2 2020, Kenya’s rate of jobless doubled to 10.4 percent compared to 5.2 percent in the first quarter. The rise in the jobless rate coincides with the hit of the Covid-19 pandemic. Job losses were being recorded in millions. The jobless rate in Q2 2020 is also higher than the 4.7 percent recorded in the same quarter of 2019.

What’s worrying is that the level of jobless among young population aged between 20 to 29 years. The rate rose by 20 percent for the young generation, the highest on record.

The rate is expected to stand at 6 percent by the end of fourth quarter.

Kenya’s benchmark lending rate is at 7 percent. This is the lowest since September 2011. The Central bank had slashed the rate from 7.25 percent in its April 2020 meeting to tackle the impact of Covid-19 pandemic.

The next meeting of the Monetary Policy Committee (MPC) will be held on Thursday, November 26, 2020.

The rate is expected to be kept at 7 percent by the end of fourth quarter.