While the loss of human life is the most critical aspect of an epidemic, the spread of a virus can also have a huge toll for national economies. The countries are affected through health, transportation, agriculture, tourism and foreign trade channels.

The global spread of Coronvirus threatens to have serious macro economic consequences worldwide. As the world has become financially interconnected, the global cost of infectious diseases is also rising.

The IMF experts say that China’s experience so far shows that the right policies make a difference in fighting the disease and mitigating its impact—but some of these policies come with difficult economic tradeoffs. 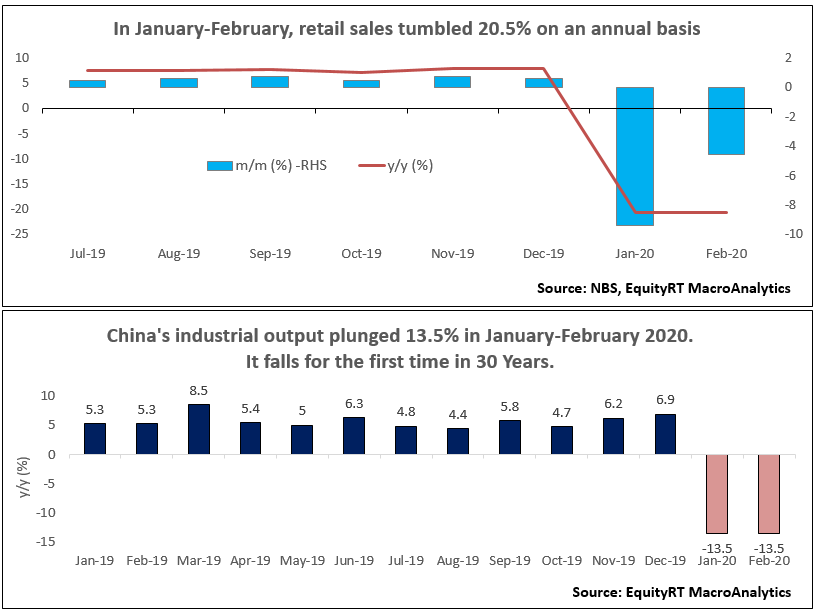 Indeed, widespread restrictions on the logistics of good and services, labour mobility and travel, as well as containment measures such as factory closures have sharply cut domestic demand and the manufacturing and services sector activities in China. The government authorities have released a number of policies to limit the adverse impacts of the outbreak on the economy, indicating that they would intensify monetary stimulus and speed up investment spending.By all indicators, reflecting its key role in global supply and demand chains and commodity markets, China’s slowdown in the first quarter of 2020 will be significant and will leave a deep mark for the year.The growth is predicted to rebound not before 2021.

It is obvious that the economic damage will not be limited to China. Major outbreaks in South Korea, Italy, Spain, France, Germany, the United Kingdom, the United States and the other corners of the world brought many businesses to a sudden stop, put equity prices into a meltdown and forced monetary authorities across the world to respond by cutting interest rates, releasing economic rescue packages to keep business ticking over.

Emerging markets are dealing with a more challenging environment. Most do not have the financial sources or healthcare infrastructure to combat with this pandemic. Iran is one of the worst affected nations. Two weeks ago, the nation has sought financial aid from the IMF. This has been the first time since 1962.

In early March, OECD slashed global growth forecast to 2.4%, weaker than its previous projection of 2.9%. The organization has underlined that on assumption of a heavy toll of coronavirus spread, global growth could even slip down to 1.5% in 2020.

Capital Economics forecasts that widespread shut-downs remaining in place across the world, most countries will contract between 10-20 % q/q in the first or second quarter of 2020, with the hit starting first in Asia later followed by Europe and the United States.

Since the shock has disrupted both the supply side and the demand side of the economy, the total effect on inflation will depend on how these two forces balance out. If the consumer spending falls further, we may face a greater risk of deflation in the short term.

With no end to the coronavirus break currently in sight, investors, economists and market observers are increasingly concerned that a global recession is now a foregone conclusion. At the moment, health is the most important issue, but it is impossible not to be concerned about the economic consequences.

Any improvement will be dependent on how quickly supply chains start functioning and consumer spending getting back on its feet again across China and the rest of the world.

We use cookies to ensure that we give you the best experience on our website. If you continue to use this site we will assume that you are happy with it.OkPrivacy policy