MacroAnalytics: Time to Put A Frame Around the Bigger Picture

Since John Maynard Keynes first introduced macroeconomic theory in The General Theory of Employment, Interest and Money; it has evolved and given birth to many other interpretations. These are collectively called Keynesian economics or Keynesianism.

Macroeconomics and the Unknown Factor

According to Keynes, there will always be unknown or “unmanageable” factors, which must still be considered in macroeconomic studies. He believed strongly that the volatile and ungovernable psychology of markets would lead to periodic booms and crises, and an economy was unable to automatically adapt to provide full employment even in equilibrium. Keynes argued against the classical theories of his time, instead of introducing concepts of the consumption function, the principle of effective demand, and liquidity preference, as well as giving new prominence to the multiplier and the marginal efficiency of capital.

In an era where people struggled to standardize processes and develop insights based on scalable objective data, Keynes was key to realize that economies were much more complicated than 2+2=4, and he saw the need to include “unmanageable” factors like human behaviour, tendencies and nature.

People tend to ignore what they don’t fully comprehend or cannot efficiently calculate. This was the standard method employed by economists, market analysts and financial experts before macroeconomics was introduced to the world. They were unable to collect or comprehend the whole set of macro data, resulting in their inclination to ignore certain elements contributing to the dynamics of macroeconomics. This is how macro indicators of major economic depressions, such as the Great Depression, were able to pass by without anyone raising a red flag. Basic assumptions were made, such as the fact that full employment was the natural result of competitive markets in equilibrium. These assumptions were proved incorrect by Keynes and real-world events.

Macro readings come out in different frequency, impact and meaning and some of them such like growth, consumer prices, monetary policy decisions may cause high volatility in financial markets. Changing market conditions can affect the significance of a macroeconomic indicator.

A good example for this would be the economic crisis in 2007, where the housing sector’s collapse lead to analysts investigate on indicators related to the real estate market.

The Real Human Element in Macroeconomy

Today, we’re living in a digital age where everything can be tracked with secondary or complementary-data, including location, time, duration and demographical data.

Today’s market analysts and financial experts aim to include all these elements into the field of macroeconomics, which allows them to see the bigger picture and try to manage the “unmanageable”.

How to Manage Massive Amounts of Macro Data

In macroeconomics, the sheer scale of data is enormous. It is truly unmanageable for mere human minds. That’s why financial analysts depend on market analyses platforms and software to cope with the data.

There are two main approaches to managing data:

The first is relying on advanced software, which depends in turn on machine learning or AI (Artificial Intelligence). The second is to do it manually.

EquityRT Financial Analyses Platform adopts the former approach. The platform collects vast amounts of macro data and presents it in an easy-to-understand manner through a user-friendly interface.

The same approach applies to EquityRT’s Macro Economic Data Module. “MacroAnalytics” is a macro-data module integrated into EquityRT to combine sets of fundamental data and the analytics on the ever-changing dynamics of the economies. With such an abundance of data, the module makes it easy for users to quickly get the information they need, whether for research or investment purposes, to make fast and accurate assessment. 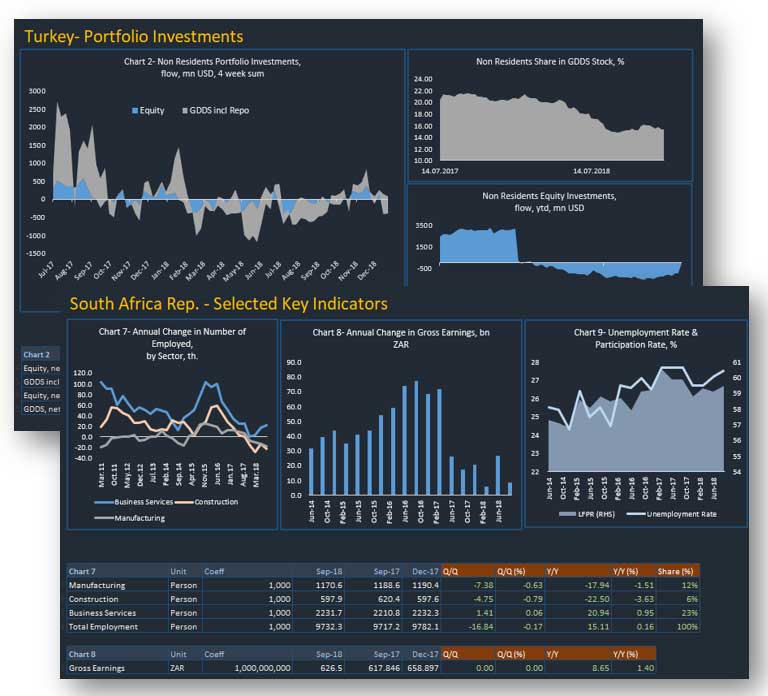 Another advantage of MacroAnalytics is that it offers a wealth of comprehensive macro-economic indicators on Turkish economy, complemented by key data on developed and developing economies. Indicators are segmented into concept economic aspects for the analysts to intuitively locate the data. To ensure full comparison, EquityRT carries cross-country indicators from reputable sources, (IMF, World Bank, OECD, Eurostat and BIS).

As financial analysts become bombarded with macroeconomic data and insights, it’s increasingly hard to track all the moving parts. EquityRT manages these moving parts for businesses, ensuring all data is held accountable within the bigger picture. In fact, with the help of EquityRT’s AI-powered software, even the frame is included with the picture!

We use cookies to ensure that we give you the best experience on our website. If you continue to use this site we will assume that you are happy with it.OkPrivacy policy