Will Japan rebound amidst Covid19?

Japan is the world’s third-largest economy with nominal GDP of $5 trillion as of 2020. The Japanese economy was once the world’s second-largest after the United States until 2010 when it was taken over by China.

As in other advanced countries, the services sector accounts for the highest percentage of the GDP, followed by manufacturing and agriculture. 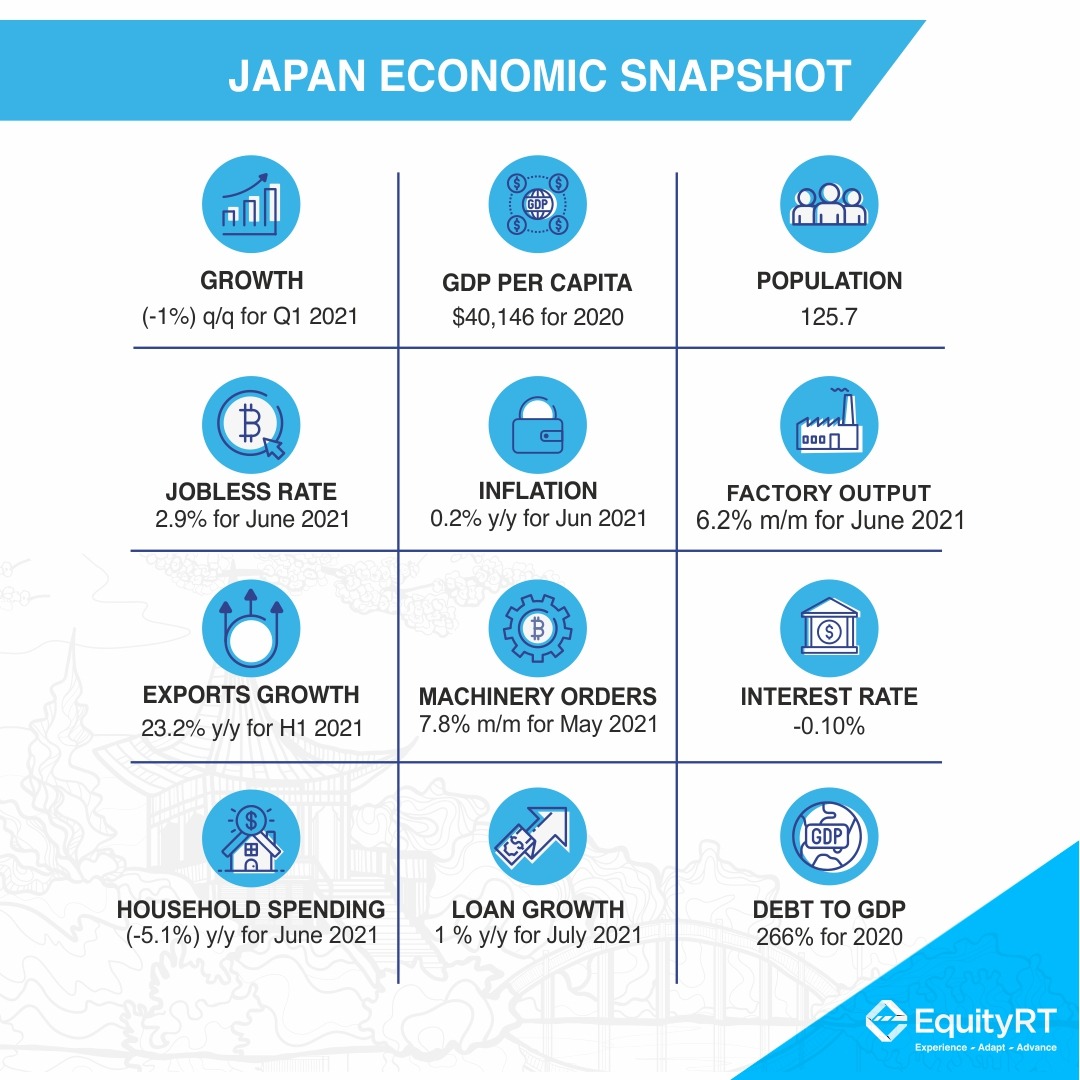 Below we have summarized the recent macro readings on the Japanese economy:

– Japan’s GDP shrank by 1% on a quarter-on-quarter basis in Q1 2021. The GDP decline was mainly due to a fall in capital spending and government consumption. In its July report, the IMF forecasts that Japan’s economy will grow 2.8% in 2021, down 0.5% from the April estimate. The growth outlook for 2022 is 3%.

– Jobless rate dropped to 2.9% in June 2021. The figure in May (3%) was the highest jobless level in five months.
With a long-term average of 3.7%, Japan’s jobless rate is lower than most industrialized countries.

– The core inflation rate, which excludes fresh food prices, rose by 0.2% in June from a year earlier. The figure marks the fastest annual increase in over a year but remains far from the Bank of Japan’s longstanding target of 2% inflation.
The key interest rate remains at minus 0.10%

–  Factory output picked up by 6.2% on a month-on-month basis in June 2021. Motor vehicles and production machinery largely contributed to the rise. 6.2% is the strongest growth in industrial production since July 2020.

– Core private-sector machinery orders rose by 7.8% on a month-on-month basis in May 2021, indicating a recovery in capital spending by Japanese machinery companies in the reference month.

–  Total lending by Japan’s banks grew 1% in July 2021 from a year earlier. The rate indicates the lowest annual growth in nearly nine years. Overall bank lending in Japan had surged to record levels last year as a result of demand from companies to cushion the impact of the pandemic.

– Household spending unexpectedly fell by 5.1% from a year earlier after an 11.6% surge in May 2021. The family spending in 2020 was largely supported by the government’s cash handout program which was launched in May 2020.

Economic indicators for over 200 countries available through EquityRT. Contact us to get started with your free-trial of EquityRT MacroAnalytics.